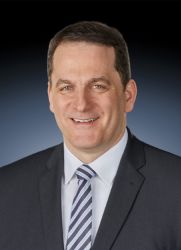 Born in Herne, Germany in 1968. Studied electrical engineering and industrial engineering at the Universities of Applied Sciences in Bochum and Dortmund.

He held a number of management positions at Opel from 1993 to 2015, including the roles of Production Manager and Deputy Plant Manager, focusing on boosting the efficiency of production systems and reorganising production structures.

From 2015 to 2017, he was Executive Vice President Production at Rittal.

He has been Managing Director Production since 2017.