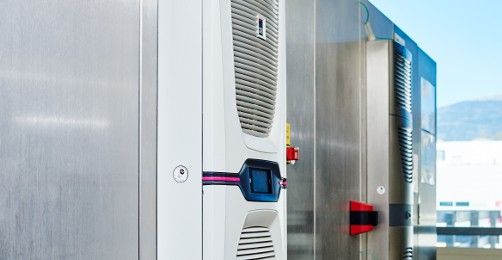 Downloads Download customer reference
Enclosure cooling is making a quantum leap forward with the latest generation of Blue e+ wall-mounted cooling units. Rittal has succeeded in getting two heat transfer technologies to work in the device.

Getting access to Nestlé’s coffee research centre in Orbe, Switzerland, is like getting an invitation to visit a maze. Countless lines, machines and control panels have been installed in the rather small production building of the Nestlé Production Technology Center (PTC). In this test factory, developers puzzled out the details of the Nespresso capsules before they were produced for the first time. Similarly, the freeze-drying process for roasted coffee has been undergoing optimisation there for decades. Successful product innovations make Nestlé’s PTC research centre a group-wide reference point for the use of new process technologies. The PTC relies on the expertise of a number of partners and it was therefore prepared to take part in a comparative test that would show the energy efficiency gains achieved by Rittal Blue e+ in comparison to a standard cooling unit.

The focus is on saving cooling energy

In the foodstuffs industry, there is not only a necessity for process heat but also a need for cooling as constantly and as energy-efficiently as possible. Not only does the refrigerated storage or fast freezing of food require a lot of energy, but also the cooling of electrical controls. Heat has to be continuously dissipated in order to ensure a constant temperature within an enclosure. Nestlé Switzerland is committed to resource-efficient work and has made concrete commitments to continuously improve its own environmental performance, for instance in terms of CO2 emissions and water consumption.

Rittal approached the Nestlé PTC with the proposal to carry out a comparative test between a conventional “Blue e” cooling unit and one of the latest “Blue e+” generation. Each are mounted on two identical Rittal enclosures that were already in operation at the customer’s factory. Rittal is not only offering the new climate control unit for the test period but it is also making measurement protocols and measuring devices available for a whole year. It is already quite clear that the Rittal Blue e+ principle is massively improving the energy efficiency of cooling. Based on the results to date, it is expected that about 72 percent less power will be consumed during the test phase than with the older standard Blue e device.

Enclosure cooling is making a quantum leap forward with the latest generation of Blue e+ wall-mounted cooling units. Rittal has succeeded in getting two heat transfer technologies to work in the device. Firstly, a speed-controlled compressor ensures the optimum cooling capacity. Secondly, a heat pipe is installed. This pipe is filled with a refrigerant that fills the volume both when in a liquid or in a vaporous state. In one part of the pipe, i.e. in the evaporator, heat is transferred from the interior of the enclosure to the liquid, which evaporates immediately. This causes a pressure gradient inside the pipe, causing the resulting steam to rise upwards to near the condenser. The latent heat previously absorbed is released from there to the ambient air and the refrigerant changes its state of matter from gaseous to liquid again. The liquid refrigerant flows back into the evaporator through gravitation and the cycle starts all over again. However, this principle can only function if the temperature outside the enclosure is lower than the temperature within. With the heat pipe, cooling is, so to speak, free-of-charge and without any external intervention.

A constant temperature inside the enclosure is ensured by means of three modes of control: heat pipe mode, hybrid mode (heat pipe and compressor), and cooling circuit mode (if it is warmer outside the enclosure than inside). The device also offers digital interfaces: Data can be read out immediately and fault signals can be sent to a smartphone, for example.
The innovative Blue+ principle makes the enormous progress in cooling technology obvious.