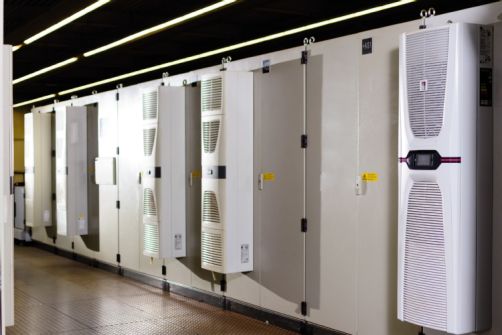 Downloads Download pdf reference
The company now depends on energy-efficient cooling units from the Rittal Blue e+ series in order to dissipate heat from the enclosures.

STIWA Automation GmbH, based in Upper Austria, takes the issue of environmental management very seriously. For example, regular checks of energy consumption are made there. One of the results of this was surprising – in some cases, machines require less energy in order to move than they need for climate control purposes. The company now depends on energy-efficient cooling units from the Rittal Blue e+ series in order to dissipate heat from the enclosures. This also benefits the customers who now have to document their energy management efforts in the context of an ISO 50001 certification.

“The potential savings achieved when changing from the ‘Top Therm’ to the ‘Blue e’ were good, but this gain has even been surpassed with the ‘Blue e+’. Stefan Baier, Head of Electrical Engineering Product Management, STIWA Automation

STIWA constructs high-performance machines that operate with cycle times of far below one second. In addition to this core business, the STIWA group’s skillset includes product and software development for production automation, the manufacture and supply of high-quality metal and plastic assemblies, as well as energy-efficient building technology and laboratory automation. The company currently operates eight factories in Austria, China, the USA and Germany. To meet the extremely demanding applications in mechanical engineering, components have to come from those manufacturers who can keep up with the high standard. The company therefore performs numerous endurance tests so that it does not to have to rely on information from the manufacturers themselves.

The new Rittal Blue e+ cooling unit series was also subjected to these endurance tests. STIWA has been keeping an eye on the energy efficiency of climate control units for some years now. A few years ago, it changed over from using Rittal ‘Top Therm’ to Rittal ‘Blue e’ units. As a result, energy savings in the five figures could be achieved over the entire service life of a large machine with about 30 climate control units. STIWA was initially very sceptical as to whether any further savings could be achieved at all when it introduced the Blue e+ devices. This was followed by in-house tests in a production environment to verify the 75 percent energy savings that Rittal has stated. To this end, Blue e+ devices were installed in a variety of enclosures and the values were then measured. The devices even exceeded Rittal’s own figures, providing energy savings of 80 percent.

Hybrid cooling is the key

avings result from the devices’ novel hybrid technology, in other words the interaction of a compressor cooling unit and a heat pipe. Neither a compressor nor a pump is called for when cooling with the passive heat pipe, so that very little energy is consumed. The compressor is only used when passive cooling is no longer sufficient. Since all the compressor cooling drives are speed-controlled, their operation is also very energy-efficient. These high-efficiency devices also have a number of other advantages: Thanks to the patented multi-voltage capability, the units can be operated flexibly in all standard grids worldwide. This also reduces the time needed for project planning.

With these machines, The enormous energy sSTIWA is helping its customers to achieve ISO 50001 certification. Although individual machines cannot be certified separately, customers are provided with the necessary characteristic data. Besides this, the company guarantees that components are used that originate solely from manufacturers active in the field of energy management, as is the case with Rittal.