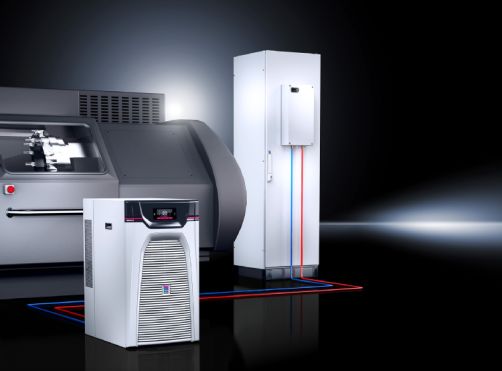 Energy consumption could be reduced significantly with the energy-efficient devices.

You should never underestimate the energy consumption of machine tools: cooling enclosures and spindles for instance account for more than 15 per cent of it. A test installation in a CNC lathe at Bosch Rexroth demonstrated that the new Rittal Blue e+ chillers significantly reduce energy consumption.

“The Rittal Blue e+ chiller consumes 50 per cent less electrical energy than the old chiller, while the saving achieved by the cooling unit in the enclosure even exceeded 80 per cent. This example shows us that a great potential still exists in many sectors.”

Bosch Rexroth AG, a long-established company, runs an energy efficiency consultancy called GoGreen at its headquarters in Lohr am Main. Its task is to examine the energy efficiency potential of the company’s own production plants worldwide and to develop appropriate measures. To this end, GoGreen also works with institutes and technology partners such as Rittal. One of the most important research projects in which GoGreen is involved is the “Eta-Fab” (energy efficiency, technology and application centre) project at the Technical University of Darmstadt. The project is headed by the University’s Institute for Production Management, Technology and Machine Tools (PTW). The chain of processes reflected in this research factory originates from the Rexroth plant in Elchingen. Consequently, that is where the practical implementation of research results is being investigated. One of many aspects of the project is the energy efficiency of machine tools.

Hydraulic pumps and motors for mobile machines are some of the products being made at Bosch Rexroth’s Elchingen plant. A number of different components for the hydraulic power units are manufactured, among other things, on a CNC lathe. In the context of a project, GoGreen staff retrofitted it with a new Rittal Blue e+ Chiller. The machine has a total connected load of 75 kVA and runs for up to six days a week in three-shift operation. To quantify the increase in energy efficiency accurately, the energy consumption was documented in detail both before and after retrofitting.

Machine tools for cutting metal usually need the spindles to be cooled to dissipate the heat generated by the drive technology. This is made possible by liquid cooling. Following the retrofitting of the CNC lathe, the cooling medium required is provided by the Rittal Blue e+ Chiller. A DC compressor controlled by an inverter generates the necessary cooling output in the chiller. A circuit then transports the cooling medium to the consumer, for example to the spindles. In order to provide efficient climate control for the machine tool’s enclosure, the previous compressor cooling unit was replaced by a new one from the Blue e+ series.

An impressive increase in energy efficiency

Energy consumption could be reduced significantly with the energy-efficient devices. The new chiller consumes less than half the electrical energy needed by the old one while the saving achieved by the cooling unit in the enclosure even exceeded 80 per cent. Another important aspect is the simple operation of the devices: the control panel with its touch display shows every message in plain text – in any of 21 different languages. The operator receives all the important information and status messages quickly and clearly, enabling rapid reaction. With the Blue e+ App, which communicates with the devices via NFC (Near Field Communication, an international transmission standard based on RFID technology for contactless data exchange), important information can be transmitted wirelessly, something that is especially important when a number of chillers have been configured. It makes work so much easier.