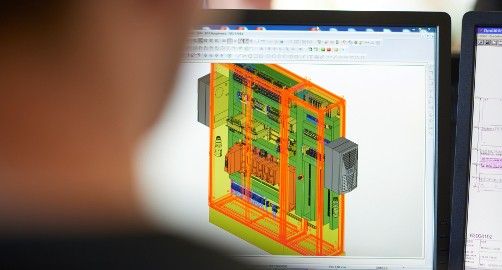 Extensive preparatory planning work is needed before a new project is allowed into Blumenbecker’s production building. Each project begins with the electrical design of the controllers and switchgear, during which the wiring plans and circuit diagrams are created. The high efficiency needed can only be achieved if the quality of data is high enough.

“We are only satisfied with the quality of data from a few companies. In this aspect, Rittal, which is also one of our main suppliers, is exemplary.” Peter Kindt, Team Leader for Control Technology at Blumenbecker Automatisierungstechnik

Construction planning is carried out after electrical planning. All the components are placed in a virtual 3D model in the enclosure, based on parts lists from the electrical planning. The geometric dimensions are important so that afterwards, everything fits in the enclosure as envisaged during construction planning. The corresponding Step files for 3D construction planning are included in the database for all components. During the construction planning stage, Blumenbecker specialists use the Eplan Pro Panel 3D engineering tool. The seamless re-use of data is a major advantage of the system. The preferred source for the component data is the Eplan Data Portal. Planners can find more than 600,000 items of component data from 147 manufacturers on this web-based platform. In addition to the 3D data, the Data Portal also contains additional information on the components, such as schematic macros and commercial data.

Rittal supplies enclosures, housings, power distribution systems and climate control components to Blumenbecker. Following delivery, the enclosures first arrive at the Mechanical Processing department. There, CNC machines give the enclosures and the mounting plates the holes, threads, and breakthrough openings needed. The data for controlling the CNC machines comes directly from the 3D construction planning with Eplan Pro Panel. This data is also used to automatically cut the DIN rails and cable ducts, as well as for automatic cable assembly.

During assembly, staff also use the 3D construction plans from Pro Panel. During the final production step, the fully assembled enclosures are then wired. The cable harnesses for a project had previously been produced on an automated machine for cable assembly. Length, colour, conductor cross section, stripping of insulation, the installation of wire end ferrules and the cable labels are produced in Pro Panel based on the 3D construction planning and autorouting.