To the new website of www.rittal.com
Wishlist
Industries – References – Enclosures 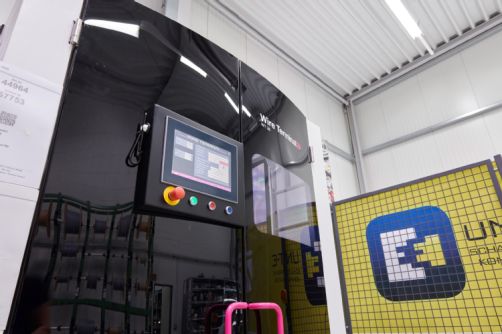 Downloads Download pdf flyer
The new machine can process as many as 1,500 wires during an eight-hour shift

Promoting automation is Andreas Ripploh’s goal. At his company, Ripploh Elektrotechnik & Engineering, for example, a Wire Terminal from Rittal is now in operation that significantly increases productivity in wire processing. The new machine can process as many as 1,500 wires during an eight-hour shift. And since there’s no longer any need for operator intervention once a job has been started, the Wire Terminal produces the exact same volume overnight. “Employees can remove the wires from the machine in the morning and set about installing them straight away,” says Ripploh. The various work steps, cutting to length, stripping, crimping and labelling of the wires, are carried out fully automatically by the Wire Terminal.

“The Wire Terminal quadruples the productivity of wire processing.”

All processes at Ripploh are highly digitized and, if possible, automated. The data generated in the engineering department is used seamlessly to manage processes in the workshop. The 3D planning in EPLAN Pro Panel, for example, provides the data for the CNC machine used to machine panels and for fully automated wire processing. What is more, Ripploh equips each of its employees with an iPad that provides them with all their jobs and the information they need. The enclosures, picked components and now also the magazines with the wires assembled using Wire Terminal are all provided with QR codes. Employees scan this code on their iPad and can then start the job. “Staff can only begin wiring, for example, if the approved plans are available on the server,” explains Ripploh. They are shown the cable routes to be used for the wiring on their iPad. This not only ensures high efficiency and speed; it also greatly reduces the likelihood of errors.

The new Wire Terminal fits perfectly into the digitalized workflow of the panel builder and switchgear manufacturer. However, there is another invaluable advantage to the Wire Terminal: “We can now stipulate the sequence in which the wires are processed and deposited onto the rails.” This functionality is very important for ensuring the efficiency of wiring operations. Depending on the order, wiring can be carried out in the optimum sequence and thus efficiently and quickly.

By implementing automation and digitalization across the board, the panel builder and switchgear manufacturer has achieved a great deal. According to the company’s Managing Director: “Today, we can complete significantly more jobs than just a few years ago with the same number of staff.” This is especially important because qualified and skilled employees are practically unavailable on the labour market. Since the digitized workflow dictates the activities in the workshop very restrictively, it is also possible that even staff who have only received on-the-job training will have to take on some of the tasks. Ripploh already prepares the next steps towards further automation. Since the Wire Terminal places the processed wires into its storage unit in a defined sequence, it is conceivable that it could pass them on to a robot to carry out the wiring. “We are already working on this and are confident that in two years or so our wiring operations will be robot-assisted,” says Ripploh.