Bepacom: VX25 as the foundation of sustainable technology 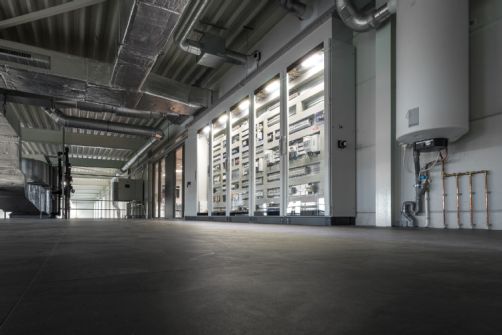 When Bepacom erected its new, consistently energy-neutral company building, the choice of which enclosure technology was needed for the required electrical equipment was an easy one: The Rittal X25 large enclosure system offered the ideal platform.

When Bepacom erected its new, consistently energy-neutral company building, the choice of which enclosure technology was needed for the required electrical equipment was an easy one: The Rittal X25 large enclosure system offered the ideal platform. The medium-sized Dutch company Bepacom has been developing reliable control systems for sustainable industrial processes and for building technology since 1995. And right from the start, the company has been using Rittal products for this purpose.

Herwin Kemper, Bepacom’s works manager and son of the company owner says: “In recent years, the company has been growing strongly and we are taking on ever larger projects. That’s why we can make good use of the extra space that our new building provides. Through this sustainable company building, we are visibly establishing ourselves as experts for sustainable investments and we are becoming more attractive both for customers and future members of staff.” In every project, Bepacom always tries to achieve the optimum yield in cooperation with its customers. However, Kemper also expects the same from suppliers like Rittal: “Then at the end of the day, every activity and each decision has to offer added value to the end customer.”

“We could quickly see that the new enclosure system offered practical advantages” says Kemper. The new Rittal VX25 assembly technology makes it easier to put the things together.” For example, more components are needed when several enclosures are arranged as a suite. The variety of parts has also been reduced, even with the add-on components. This advantage is directly reflected in simpler storage. One reason is the VX25’s new frame section, which is used in both the vertical and horizontal frame components. Fewer different parts also means parts aren’t mixed up as frequently. This reduced complexity not only lessens the logistical effort, but also results in direct cost savings. Furthermore, small and apparently simple adjustments ensure that Bepacom can also save a lot of time. This means that the new large enclosure system needs far fewer screw fittings. And when it comes to screwed joints, Kemper can see another enormous advantage: “The same bit can always be used for all Torx 30 screw fittings. Our assembly staff really like that.”

In the electrical workshop of the panel builder and switchgear manufacturer, the employees have to concentrate on installing and wiring the components. Any mechanical work, such as the installation of components in the enclosure frame thus has to be performed as quickly as possible. Here too, the VX25 helps speed things up. The enclosure doors, for instance, can be removed easily. With the new system, there is no longer any need to lever out the hinge pins, something which had previously been necessary. The concept of one-person assembly, which applies to the entire enclosure, also helps to speed things up. For instance, one employee can assemble a rear panel without any help from their colleague. They simply hang the panel in place at the top and it stays put while they tighten the screws. It may well be just a few hand movements, but this ensures their colleague can carry out other tasks at the same time.