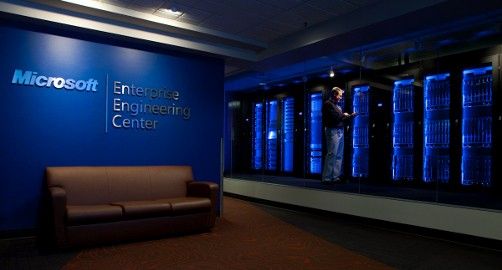 Microsoft offers its customers the option of testing out new software in a specially built data centre at its headquarters in Redmond, USA, before they put it to use in their production environments. In the Enterprise Engineering Center (EEC), over 700 servers are used to simulate the IT environments of large companies, removing the risk of surprises when it comes to the actual implementation of next-generation products.

“The improved energy efficiency is a blessing for my budget.”
Michael Dillon, Microsoft EEC

Following expansion of the test laboratory, Microsoft can now depict how migrations will impact energy consumption even more accurately. Microsoft uses IT infrastructure from Rittal.

Microsoft customers use the EEC to simulate their own production environments and put the early versions of new software through practical testing. The expansion helped to deliver a wider range of more sophisticated testing options. The heart of the installation is formed by a total of 38 TS 8 server racks and 15 rack-based LCP Plus (Liquid Cooling Package) high-density cooling systems from Rittal.

Energy consumption cut by up to 40 percent

The Rittal products are particularly suitable for modern, high-density data centres, where ever greater loads and heat are generated in the server racks by blade servers. The modular TS 8 system is therefore designed for a weight of up to 1,600 kg. Unlike CRAC systems, which supply entire data centre rooms with cold air, the LCPs are installed directly alongside the racks for targeted delivery of cold air in front of the servers. In this way, the Rittal system is able to dissipate very high heat loads and reduce energy consumption for climate control by up to 40 percent.