Manner: Rittal and the chocolate factory 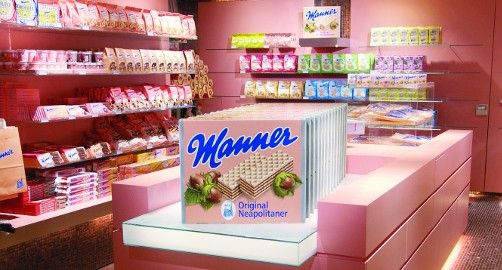 The heady scent of ground cocoa beans permeates the air in Vienna. Manner has been producing its famous Neapolitan wafers in the Austrian capital for more than 100 years and is currently investing heavily in its production site. Over the next three years, it plans to spend some 40 million Euros on expanding its facilities. While the Manner headquarters was being rebuilt, a new data centre was also set up – and it was Rittal that supplied the IT infrastructure.

“The cost and energy savings were the main reason that we opted for a cold aisle system – and a plus-point for Rittal.”
Richard Freitag, IT and Network Operations, Manner

Throughout the entire food industry, it is crucial that production is documented thoroughly so that products and their ingredients can be traced. And, naturally, meeting this requirement depends very much on perfect functioning IT.

The task for Rittal was to fit out the data centre with IT racks, install an energy-efficient climate control system to ensure the servers run smoothly, put in place alarm systems for monitoring temperature, humidity and leaks and implement a redundant power supply. The entire IT team at Manner were involved in designing the data centre.

The Manner servers were installed in 14 Rittal TS IT racks, which were arranged in two suites facing each other to form the cold aisle. Aisle containment stops cold air mixing with warm air, which would have a detrimental impact on the energy balance. Door and roof components separate hot and cold air in the data centre. Because the air currents cannot mix, the cooling system can operate more efficiently, which has a beneficial impact on energy consumption and the power reserves of the climate control technology.

Manner also turned to Rittal for monitoring systems. The Computer Multi Control III (CMC III) system uses sensors in the racks to monitor temperature and humidity and issues an alarm if a leak is detected. If a malfunction occurs, a central fault indicating system notifies the standby team. However, the completion of the data centre didn’t bring an end to the collaboration between Rittal and Manner – the full-service package was rounded off with a bespoke maintenance contract.