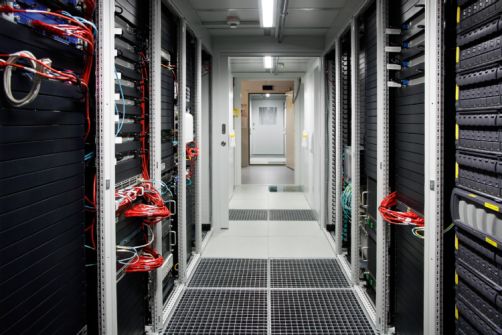 Universal-Investment has grown dramatically in recent years, which compelled the fund-managing company to move to move premises. And there was a further challenge to address: creating a new data centre in Frankfurt/Main, the most time-critical item on the project agenda. Against this background, Universal-Investment contracted Canzler Ingenieure, a specialist planning and consulting company, to assist in managing the relocation and conversion project who planned to use a Rittal RiMatrix S data centre with a view to completing the relocation two months earlier than originally envisaged.

“The room-within-a room principle allowed us to make substantial savings by using existing space – and to compress the project schedule at the same time.”
Michael Nolte, Managing Director of Canzler Ingenieure, a planning and consulting company.

Wanted: New home for IT

Universal-Investment took up offices in the ultra-modern IBC Tower in western Frankfurt. Plans were drawn up to install a new conventional data centre on one of the office floors, comprising 100 square metres of space. They would require the wholescale removal of the offices and the provision of sophisticated, redundant technical infrastructures, such as cooling, power, uninterrupted power supply (UPS) and an alarm system.

According to the original plan, the various data-centre components would be contracted out individually. However, sourcing the work separately would necessitate a huge amount of planning and time-consuming coordination between the contractors. Under these circumstances, it was questionable whether the relocation, slated for the summer of 2014, could be carried out in time.

In the end, the team opted for an attractive alternative: Rittal’s modular RiMatrix S data centre. This solution, ordered under a single Model No., enables installation of a complete, preconfigured data centre in just six weeks, including IT racks, climate control, power distribution, and software for monitoring and IT management. It greatly reduced the complexities involved. RiMatrix S was installed as a “room within a room” on one of the tower’s office floors.

The modular data centre is a security room in itself, complete with a physical access control system. It also incorporates a protective shell that affords further protection against fire, water and smoke. In the event of a power outage, the UPS unit installed in RiMatrix S cuts in first, before the tower’s diesel generator starts to supply backup power to the entire building.

In addition, a solution with integrated fire protection was implemented for RiMatrix S, eliminating the need for further safeguards in the building. The Rittal IT Security Room has already been certified to the European Certification Body (ECB•S) which simplified matters.