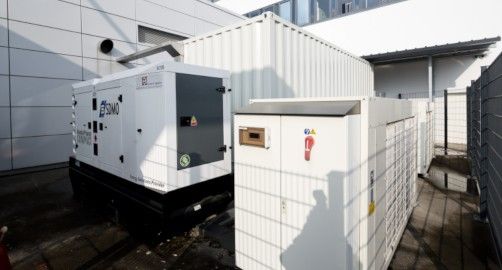 The predefined, standardised modules of Rimatrix S consist of a specific number of server and network enclosures plus climate control, power supply and monitoring, all of which can be supplied as a ready-to-use container solution...

When planning data centres, businesses tend to have very similar wish lists: maximum use of available space, built-in scalability for future growth, cost-effectiveness, and a small ecological footprint. And these goals were shared by Haberkorn. Headquartered in Wolfurt, western Austria, Haberkorn is a supplier of personal protective equipment, lubricants and products such as industrial hoses, machine elements and hydraulic components. Efficient, reliable IT infrastructure is business-critical for the company’s customers in the manufacturing and construction industries. Haberkorn not only distributes its 200,000 products in Austria, but also in Switzerland, Hungary, Slovenia and Croatia. Since its headquarters was built in 2005, the server room’s workload has increased significantly. But Haberkorn’s IT decision-makers faced the same challenges associated with expanding capacity as many of their counterparts in other organizations. Do we have sufficient space? Is it possible to safeguard ongoing data-centre operations while making the upgrade? Can we cut energy costs?

“We are accustomed to conventional server rooms that are large in size and with plenty of space. We couldn’t really imagine a viable alternative until now. But with RiMatrix S, every-thing is highly compact, and it is extremely well designed. And Rittal is our one-stop partner for the entire solution.”
Martin Rainer, Head of IT at Haberkorn

At the outset, Martin Rainer, Head of IT, and his team favoured an indoor version of Rittal Rimatrix S. But Haberkorn’s strong growth in recent years meant that even the offices were becoming cramped. However, there was outdoor area behind the building that was not in use. So in the summer of 2016, a Rittal IT container solution was deployed there. But first, the IT team needed to be persuaded of its benefits. Still with a conventional server room uppermost in their minds, they took the opportunity offered by a Rittal roadshow to look at the container solution more closely.

The predefined, standardised modules of Rimatrix S consist of a specific number of server and network enclosures plus climate control, power supply and monitoring, all of which can be supplied as a ready-to-use container solution – that can be ordered in its entirety by means of a single product code.

Designing and implementing a made-to-measure data centre often requires considerable effort, expense and time – even when a company has in-house IT expertise. In addition to the lack of space and the desire for a future-proof solution, the challenge for Martin Rainer and his team was to find a one-stop supplier for the entire IT infrastructure. This was a priority as the legacy solution, a mixture of components from diverse vendors, was complex and unwieldly to manage. In addition, sustainability is a key focus for Haberkorn. For this reason, they paid particular attention to the climate control system. Against this background, the integrated climate control system housed under the raised floor to save space was an important factor in favour of Rimatrix S Container. In conjunction with aisle containment for the separation of hot from cold areas, and air/water heat exchangers located directly under the server racks, special EC fans provide effective airflow management. This has cut cooling costs by approximately 40 percent. However, the local climate has also played a role. When the container was installed in June 2016, night-time temperatures were around 10°C, enabling the use of fresh air for cooling – even in early summer.