SUISA: music in the data centre 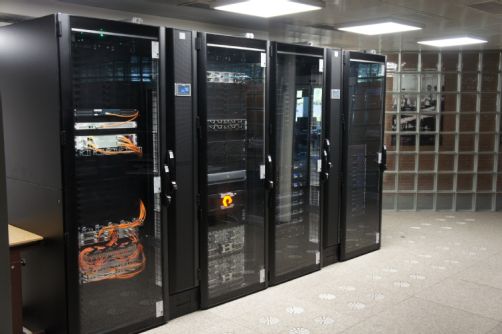 Downloads Download pdf reference here
At SUISA, four TS IT racks with two Liquid Cooling Packages (LCP) CW each plus an IT chiller were set up.

Eight million euros in royalties accrue every year when the hit “Last Christmas” booms out from the loudspeakers in restaurants and department stores or at Christmas markets. In other words, a share in the profits is paid to the artists during their lifetime and later to their heirs - as in this case.

SUISA (SUISse Auteurs) was founded in 1923: It is a cooperative of authors and publishers of music formed to protect the rights of Swiss musicians to their royalties. Nowadays, more than 37,000 composers, lyricists and music publishers are organised within it. Modern IT and an efficient infrastructure are essential for managing the numerous licences and for collecting the royalties as soon as a piece of music is played on stage, radio or television. Rittal established it in close cooperation with SUISA when it modernised its Zurich data centre.

“We certainly feel that we are both saving money and at the same time doing something good for the environment.”

Our own data centre gives us security and independence

The challenge was that the data centre dated back to the 1960s and that the entire area of 150 m2 was cooled in order to keep the servers from overheating. Thomas Lagler, IT Project Leader at SUISA, explains: “Basically, we would should only have had to cool an area of perhaps 15 m2, so it made no sense, neither economically nor ecologically.” So, in late 2016, SUISA decided to modernise its data centre. Outsourcing was to be avoided and the infrastructure was to be kept in-house. The reasons, according to Mr. Lagler were the desire for security and independence from one particular supplier. Rittal’s task was to provide energy-efficient cooling and to streamline early fire detection and extinguishing capabilities.

Dissipating heat at its source

Every enterprise is unique and whether it aims to cool individual IT racks, suites or entire rooms depends on the specific situation. Climate control units mounted directly on the IT rack, for example, dissipate heat directly at the point where it arises and are thus particularly efficient. The concept convinced SUISA. “Other suppliers could only shake their heads because they found that the existing raised floor represented a good starting position. It seemed clear to them that they could stick to the old concept and continue working with a separate cold/hot aisle for the racks,” Thomas Lagler added. However, Rittal’s idea allowed for something different. At SUISA, four TS IT racks with two Liquid Cooling Packages (LCP) CW each plus an IT chiller were set up. The LCPs harness cold water as their cooling medium and can also deal with very high heat loads of as much as 55 kW per rack. It is based on an air/water heat exchanger using cold water to cool the heated air from the IT rack. The setpoint value is thus a server supply air temperature that can be freely set by the customer. The American Society of Heating, Refrigerating and Air-Conditioning Engineers (ASHRAE) currently recommends supply air temperatures between 18 °C and 27 °C. The LCP CW regulates this setpoint value completely automatically by adjusting the flow of water and volumetric air flow to the actual heat losses. SUISA did not have to implement any structural changes for this system. In terms of air flow, the racks are now sealed off or cut off by the glass doors. This way, only the racks are cooled.

The Rittal CMC III monitoring system forms the heart of the fire monitoring and early detection capabilities. It consists of the central processing unit, which interacts in the data centre with a variety of sensors for temperature, access, leakage, smoke/fire and humidity in the enclosure. As soon as things get too hot in the rack, the doors open automatically in order to use the ambient air from the data centre for cooling.

In the past, there were no electricity meters for the data centre alone. Now consumption can be monitored and evaluated right down to the server unit itself – an important step towards energy efficiency.