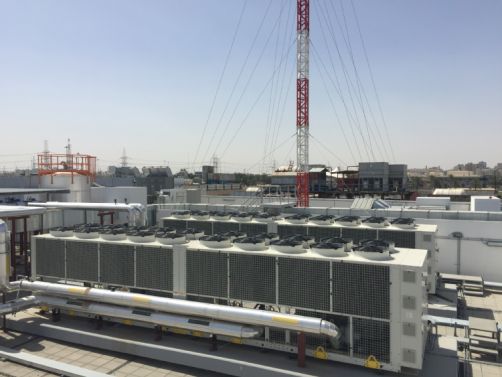 An availability of 99.982 percent and a downtime of just 1.6 hours per year – these are the Uptime Institute’s demands for the Tier III certification of a computer centre. The challenge faced by the National Bank of Kuwait was how to equip a new data centre in an existing building in such a way that these strict requirements could be adhered to. The institution, founded in 1952, is Kuwait’s first national bank. As such, it depends on rapid and highly available business processes, as well as a fail-safe IT environment. Together with Rittal, the Bank of Kuwait drew up a plan for a high-availability and reliable data centre. In the main data centre, a modular UPS provides back-up in the event of a power failure. To meet the Uptime Institute’s specifications, this has to bridge a power failure lasting up to 72 hours. Cooling and power distribution have been implemented with Rittal products and designed for multiple Tier III certification. The Rittal Computer Multi Control III (CMC III) monitoring system checks such parameters as temperature, access or air humidity in the data centre. The data are consolidated and processed in a central unit. It is then integrated via the SNMP protocol in the Rittal RiZone DCIM solution, which continuously monitors the data and, if necessary, triggers an alarm.

The IT chillers used are designed for a rated nominal cooling capapcity of 1.200 KW in an N+1 configuration; they cool the IT systems in a fail-safe manner, even when the outside temperature is as high as 52 degrees Celsius. Furthermore, the Bank of Kuwait chose a backup computer centre with IT racks, room cooling and aisle containment. Here too, CMC III and RiZone monitor the data centre.