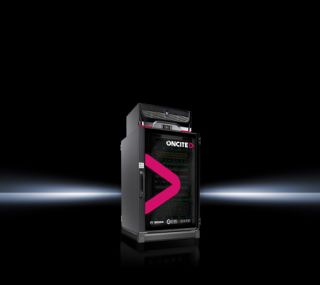 2020-02-12. First place for the Friedhelm Loh Group in “2020 Innovation Champions Award”. The award-winning ONCITE solution is the first real-time capable, data sovereign and AI-based edge cloud data centre for the future industrial processing of manufacturing data. The award, presented by the “WirtschaftsWoche” business magazine, the University of St. Gallen and the Academy of German World Market Leaders (ADWM), honours the most innovative companies in Germany.

The Innovation Award for ONCITE was presented on January 29 at the “Summit Meeting of World Market Leaders 2020” held in Schwäbisch Hall in the presence of high-ranking representatives from politics and business. In the Technology Innovation category, the “All in One Edge” solution was awarded first prize as a “beacon for German industry”. “We are very proud that our development has gained recognition in such a renowned environment,” says Dr Sebastian Ritz, Managing Director of German Edge Cloud within the Friedhelm Loh Group: “The jury’s vote confirms the feedback we have received from our customers, namely that digital streamlining of manufacturing, value creation with data from manufacturing operation, and the protection of expertise through data control are important future issues for the whole of German industry.”

The “Summit of World Market Leaders” under the patronage of Peter Altmaier, Germany’s Federal Minister for Economic Affairs and Energy, and involving around 500 participants, is one of the largest meetings of current and potential world market leaders and political decision-makers in Germany. It focuses on companies whose innovative strength is securing the future of medium-sized German businesses.

The jury presenting the award includes such business experts as Beat Balzli, editor-in-chief of WirtschaftsWoche, Dr Walter Döring, former Economics Minister of the state of Baden-Württemberg, Professor Christoph Müller from the University of St. Gallen, as well as board members from companies such as Schunk, Datev and the Würth Group.

ONCITE is a turnkey edge cloud data centre for real-time and data sovereignty Industry 4.0 application scenarios. It stores and processes data practically in real time in manufacturing processes (“on premises”) and harmonises the data for artificial intelligence (AI)-based analyses.

This way and in the shortest possible time, businesses can digitally optimise their production processes, use data to create value and make it available for further use. The users retain complete control over their data and may decide for themselves who is given access to which data, as well as which platforms and public clouds they want to use in order to network with their partners.

The solution has been developed by Rittal, iNNOVO Cloud, German Edge Cloud and IoTOS – four members of the Friedhelm Loh Group of companies – in close cooperation with Bosch Connected Industry and the Fraunhofer Gesellschaft.

From industry, for industry

With ONCITE, the Friedhelm Loh Group has created a solution “from German industry for German industry.” With this innovation, it is also driving forward the major digital project Gaia-X, with which the German Federal Ministry for Economic Affairs and Energy and manufacturing companies want to bolster the European businesses against international competition.

In 1961, as Rittal began with an innovation in enclosure technology, the Friedhelm Loh Group is now supporting its customers in a variety of fields on their way into the digital future – from the value chain in enclosure manufacturing to market-leading IT racks, modular data centres, edge and hyperscale computing solutions and ONCITE.

“ONCITE is the answer to vital questions that are currently being asked by companies – particularly in manufacturing. In other industries too, ever greater amounts of data have to be securely stored, selected and processed in a value-added manner, for example in the health care sector or in ‘smart living’. There is further potential for ONCITE and Gaia-X in these areas as well”, Dr Ritz explains.