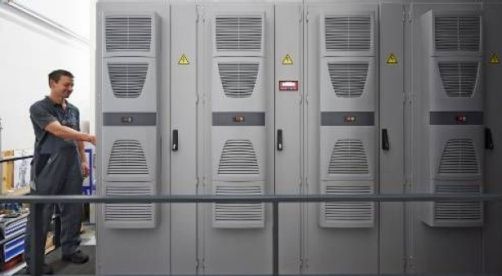 Based in the German town of Aalen-Wasseralfingen, SHW Werkzeugmaschinen GmbH is setting new standards for efficient heavy-duty machining technology with the PowerForce 8, a 200 metric ton travelling-column milling machine. It’s quite a success story. This innovation, which has been developed, designed and equipped to systematically optimise energy efficiency, won the Nortec Award for Sustainability in Industrial Production in 2012.

“The new Rittal cooling units consume around 45 percent less energy than the previous generation, which saves 3,047 kWh per year when operating the PowerForce 8.”

A new generation of Rittal enclosure cooling units are among the elements that have delivered energy savings of up to 27 percent.

Efficiency potential exploited to the full

The developers are particularly proud of their achievements regarding energy technology. They made several changes to reduce energy consumption compared to similar milling machines by up to 27 percent – or more precisely 66,000 kWh per year at a running time of 3,200 hours and an average spindle capacity of 30 kW. For example, they reduced power losses, minimised the number of moving parts, largely avoided hydraulic components and installed spindle drives without gear mechanisms. The biggest savings that the developers achieved were in the automatically controlled flow reduction of the main spindle motor.

To harness as much efficiency potential as possible in the area of enclosure climate control, SHW WM is also using cooling units from Rittal. A key factor for this improved efficiency is the perfectly configured control electronics delivered by the new ecomode control option. If the internal fan does not need to operate continuously, it is shut down automatically, thus cutting electricity costs. Another element offers certain advantages for the mechanical engineers. “By using cooling technology from Rittal, we’ve been able to link the devices via a master/slave

connection, which is one area where we had problems with other cooling units,” explains Egetemeir.

In 2012, SHW WM was presented with the Nortec Award in recognition of its optimum use of resources and energy savings in developing the PowerForce 8. SHW won this award for systematically focusing on sustainability in industrial production in all aspects of developing, designing and equipping a large machine tool.